The sky is a compelling presence, awesome in scale, profound and timeless in existence, it transcends geographical boundaries, political constraints and social status. It is a place for scientific exploration, a symbol of the infinite and a source of secrets yet to come. From the dawn of history, people have looked up at the sky, seeking their answers to their questions, noting the signs of their Gods’ favour or displeasure, discovering fantastic animals or terrifying omens of the future.

With this series of paintings the sky has been viewed within the context of historical landmarks, including standing stones, islands and ancient monuments. Viewing the sky from a specific geographical place is a way of studying its subtle differences and making a connection between it, the landscape and the people that live in that landscape, a tradition that goes at least as far back as Stonehenge. At times though, contemplation of certain skies took me to some pretty strange places. For example, ‘The Elephant Greets the Prince in an African Sky’ appeared while viewing a sky formation above Flat Holm Island in the Bristol Channel. Where as, the painting, ‘From Eternity to the Garden of Compassion’ appeared while studying the sky above Merthyr Dyfan church, Barry. It seems the magic of the sky is transcendental.

The portrayal of transformation was a central theme behind these works, trying to capture something that is tangible, ethereal and in a state of transience and flux. Under close examination I hope the pieces will transform before your eyes to reveal faces, animals, figures and vast landscapes, all elements I saw when viewing these wonderful skies. The sky can be considered a mirror of our existence and offer an insight into a way of understanding our lives, as the writer Charlotte Bronte expressed it ‘I try to avoid looking forward or backwards and try to keep looking upwards.

Lookin up at Pentre Ifan,West Wales. 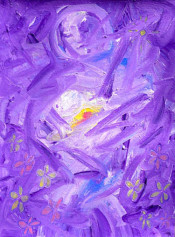 From Eternity to the Garden of Compassion

Sky looking up from Merthyr Dyfan Church in Barry.

Orange cloud above the Knap.

Orange cloud above the Knap, Barry. 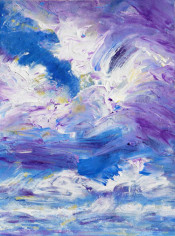 Lookin up towards Flat Holm Island from Barry Island. 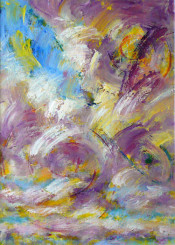 The Sky observed above St. Davids in West Wales.

Looking up at Knap Point towards Porthkerry in Barry. 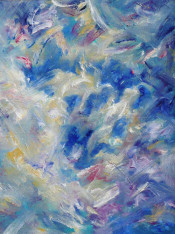 The Elephant Greets The Prince

The Elephant greets the prince in an African sky. 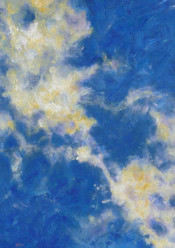 Looking up at Watchtower Bay in Barry. 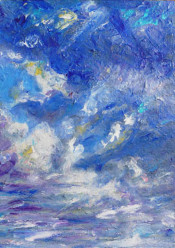 Lookin up towards Steep Holm Island from Barry Island. 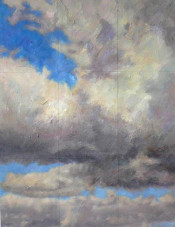 The Sky Above Barry Island

Looking up from Barry Island. 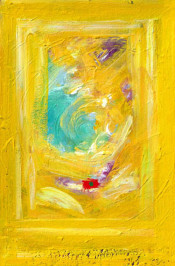 Looking up towards Steep-Holm from Barry Island.